Quantum Aviation Solutions was established in 2005 by a team of experts with extensive experience in the airline industry. The team’s initial software offering, BagSuite, was comprised of BagScan (now QuantumBRS) and BagTrail (now QuantumBMS).

Currently, Quantum Aviation is partnered with 50+ airlines and airports around the world, developing solutions focused on baggage and fleet management and helping our clients adapt these solutions to their specific installation requirements. We believe understanding the complexity of airport operations allows us to better deliver scalable technology and ultimately raise the bar for passenger experience.

Quantum is headquartered in Duluth, Georgia, USA on the outskirts of Atlanta, with offices in London, Frankfurt, and Singapore. 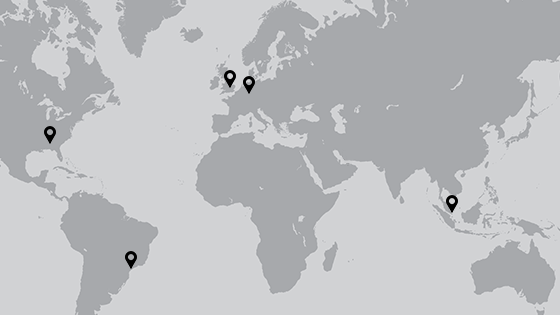 As the founder of Quantum Aviation Solutions, David brings more than two decades of industry experience to the brand. His background makes him ideally suited to lead the growing company with offices on four continents. He has worked in airline ground operations since 1988 and started the ground handling company Ramp One, Inc. in the early 1990s.

In addition to working for two major airlines in the U.S., David also served as Vice President for a large airline and airport IT company. This combination of experiences and leadership led to the creation of Quantum and the focus on airline operations below the wing. He has served in the past on committees with IATA, ACI, and SAE, and currently serves on the IATA Baggage Working Group, as well as on an advisory board with TAG (Technology Association of Georgia).

As Chief Operating Officer, Garry is responsible for global operations. Garry brings to Quantum 25 years of experience in the delivery of ground handling and baggage management solutions and services in the aviation industry. Since joining Quantum soon after its incorporation in 2005, Garry has been involved in many aspects of the business, including product management, service delivery, and business development. Garry regularly represents Quantum at industry working groups, conferences, and exhibitions.

Garry holds a Master’s Degree in Systems Engineering from Kingston University in the United Kingdom.

Originally starting as an apprentice electronics engineer, John moved into project management, then onto a key account program management role covering specialist security solutions used by Government Agencies and Airports across Europe and the United States. His involvement in airport security systems led directly to his move into airport + airline IT systems, where he has worked with several leading providers on significant projects across the world.

John has a Higher National Certificate in Electronic Engineering and a Diploma in Marketing from The Chartered Institute of Marketing in the United Kingdom.